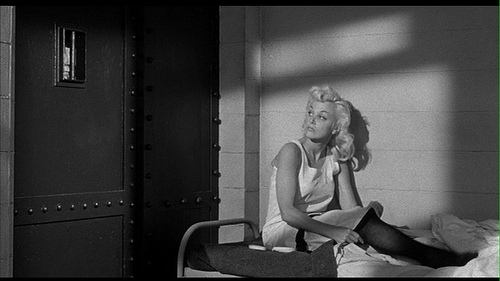 Judith Farrow arrives home early from church one Sunday morning and finds her husband in bed with her 15 year old sister Belinda, who is spending the weekend with them. Judith walks out. The next day she consults a solicitor about a divorce. Later the same day she returns home to collect some of her belongings and is horrified to discover the naked bodies of her husband and sister on the bed where she last saw them – both stabbed to death.

Judith is duly charged with having murdered them. Her defence counsel urges her to plead ‘temporary insanity’, but she refuses. Mainly due to the fact that she insists on telling the truth, she is convicted and sentenced to imprisonment for life.

In prison, she is subjected to the most unspeakable indignities. Gradually she hardens. After three years having learnt to hold her own with the dregs of humanity, she is visited by Edmund Paradise, a top notch lawyer who tells her he has been retained by newspaper magnate Rothwell Merrington to look into the case, with a view to launching an appeal against Judith’s conviction. Paradise makes it clear to Judith at the outset that he believes she is guilty; but he tells her if she acts in accordance with his instructions, he will get her off. She agrees.

Paradise then proceeds to trump up a case for her – based on lies, ‘bought’ witnesses and bribed officials. He proves as good as his word. The appeal is upheld, and Judith is released. Determined to prove to Paradise, with whom she has fallen in love, that she is, in fact, innocent, she sets about investigating the murders she was unjustly convicted of, prepared to go to any lengths or sink to any level to get to the truth.

In the belief that the newspaper czar Merrington, who put up the money for the appeal, knows the identity of the real murderer, she becomes involved with him – and is ultminately moved to the conclusion that the murders were committed by Merrington’s son. Subsequently – events show that she is mistaken – and, in a horrifying denouncement, she stumbles on the truth that she has sought for so long.