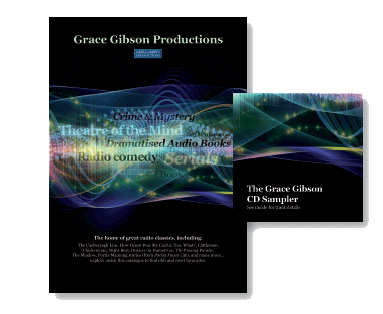 We receive a lot of positive feedback and compliments about how ‘clean’ our radio serials sound, with so few ‘clicks & pops’ and other surface noise.

That is no coincidence, as we go to an awful lot of trouble to get the best possible sound from our collection.

And as anyone who has played an ill-treated old record album knows, those clicks and pops really DO get in the way of your listening pleasure, especially in spoken word features like radio serials.

So how do we achieve this? Let’s take you through the steps, but first a bit of background history about the original recordings.

When Grace Gibson and her contemporaries recorded their serials, they often cut a master disc ‘on the run’ – as the actors were recording it. These acetate ‘master discs’ – originally 16 inches, but later 10 inch and eventually 12 inch albums – were quite expensive (so actors knew they had to get it right on their first take if they wanted to get more jobs!).

From these master discs, only a handful of copies were made: very often just 6 discs of any episode, which would be shipped around the country from one radio station to the next, through the post office or on the train. So by the time they had done their circuit, the discs often were a bit ‘worse for wear’.

When we took the decision to open up our library of radio serials to the general public for their individual ‘home entertainment’, we knew that we had to offer the best sound we could possibly get, so we invested heavily in the best audio processing gear available produced by a UK company called CEDAR. They are regarded as being the ‘gold standard-bearer’ of audio processing throughout the world. Unlike the bulk of their competitors, ‘CEDAR Cambridge’ can detect the difference between a ‘scratch’ or ‘click’ in a recording compared to similarly pitched sounds such as the striking of a match or the clapping of hands: and once again, that makes a world of difference especially in radio drama. Hence we bit the bullet and invested in the best ‘kit’ money could buy.

But before we even get in the studio or near a turntable, we first manually clean the discs themselves to get rid of built up dirt, fingerprints and other debris using professional products like Disc Doctor’s ‘Miracle Record Cleaner’ and the SpinClean Record Washer system.

Only then do we get into the studio to transcribe the discs from analogue to digital, once again using the top-end Prism Sound Lyra audio-to-digital converter for the cleanest transfer possible.

The episodes are recorded in and edited one by one, and once the the full serial has been completed, we then transfer it across to the aforementioned CEDAR processing gear which removes the vast majority of foreign noise from the recording: whilst still leaving in all of ‘the good stuff’.

All this is done in ‘full audio’ but from here we process the finished product into mp3 format for CD and m4a for Downloads over the internet.

Once done, we send both formats out to our quality controller – a man named Marty – who forensically listens to the serials in their entirety and highlights any glitches or errors for us to address before finalising the job.

Artwork has been commissioned during or before all this process, then we print and duplicate the CDs or upload to our dedicated server (for Downloads).

It’s a long and involved process…but we reckon you deserve it. Enjoy!!